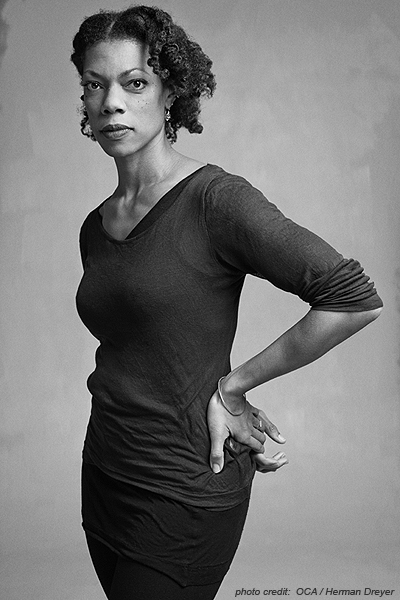 Camille Norment’s art installation “Prime”(2016) is part of the La Biennale de Lyon, which opened on September 20th.
Hans Wilmer has developed the technology from “Rapture”(2015)  for audio transmission, this involves a software and a mechanical method, more specifically exciters that produce vibrations that is felt when sitting in the installation. The sound system is Camille’s own, and Hans has reconfigured the system and thus led it to a state where she can use it in various artistic contexts.
About the installation, from Camille’s home page:
Prime  (2016)
haptic sound installation composed for benches and 4 voices
«Visitors enter a space filled with the sound of deep, resonant voices that form a pre-lingual polyphonic composition contemplating experience in the contemporary state of the world. The texture of the voices is akin to a humming, a meditation, a moan, or a chant. Sitting on one of a series of benches, the voices’ vibrations are felt directly through the body – it is as though they are physically communicating with you, drawing you into their sonic and psychic sphere, evoking something primal, visceral, bodily and universal.
This kind of vocalization has been replicated in various cultures around the world from the practice of ‘moaning’ from African American church, to Tibetan monk throat singing, to OM mantra mediation, and beyond. The sound could at once gesture to catharsis, a painful groan, a comforting meditation, or a kind of exalting orgasm.While drawing the body into the physical experience of the sound, “Prime” creates a constellation of cultural references that speak to a connectedness of sound, voice and the body’s experience.
The visual gaze is outwards to the sea or a busy pedestrian street – various scenes from various lives, but moreso is it internal, as the body is reflected back to itself through the sound.
During the opening days of the Kochi-Muziris Biennale in India, live performances by Camille Norment, Håvard Skaset, and Canartic vocalist Sujitha Pathur accompanied the installation.»

La Biennale de Lyon 2017:
«It is in a context of galloping globalization generating constant mobility and accelerated flow – the “liquidity” of the world and of identities, in Zygmunt Bauman’s analysis –, that the Biennale is exploring the legacy and scope of the concept of “modernity” in the art of our time. Bauman describes contemporary society in terms of a constant mobility generating a dissolution of relationships and identities, and an uprooting of “hypermodern” individuals. His critique of modernity, to which he ascribes a totalitarian essence in which security occupies an invasive place to the detriment of freedom, calls for a re-evaluation of the place of the individual in the world, so that the individual will remain able and wise enough to steer his way around in it.The Biennale takes its title Floating world from the Japanese word ukiyô, which describes a view of the world as impermanent and continuously renewing itself, a source of freedom and creativity. The libertarian attitudes of artists, who constantly extend the limits of the work of art to make it even more open to the world, are central to our concerns. The Biennale d’Art contemporain 2017, has dropped anchor in the heart of a place whose identity is partly shaped by the omnipresence of water, in a city “born of the waters”, through which the rivers Rhône and Saône flow. The Biennale reactivates an imagination carried along by the two rivers, generating a topography inspired by Édouard Glissant who wrote: “archipelic thought suits the pace of our worlds. It borrows from it what is ambiguous, fragile, and adrift. It allows for detours.” Some artists, such as Rivane Neuenschwander, Marco Godinho, Pratchaya Pinthong, and Julien Creuzet, are apologists for this poetics of chaos, dispersion, nomadism and movement. In the image of Hans Haacke’s huge white sail (Wide White Flow), or Shimabuku’skites (When Sky was Sea), a wind of uprisings, poetic brilliance and contemporary aesthetic explosions is set to sweep through the Floating worlds of the Biennale de Lyon.»