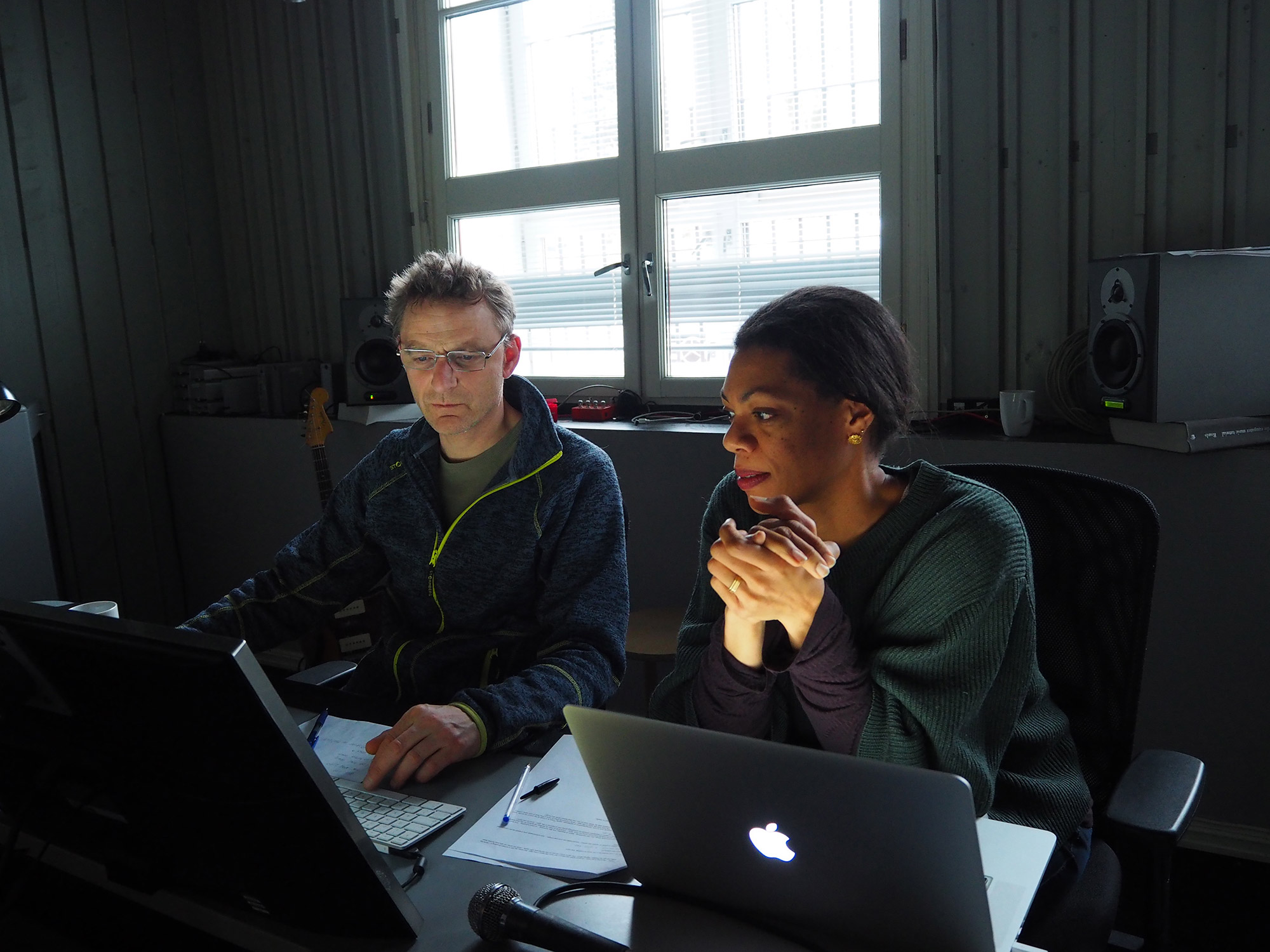 Camille Norment worked in Studio Nordheim with Cato on the soundtrack for a short film, The Haunted in early March. It premiered in January at TIFF – and got nominated for the program NEW:VISION during CPH:DOX 16th–26th of March; an artistic competition program sporting films picked by the jury because of their ground-breaking experiments in the area between documentary and artistic reflection – quoting their home page.

When we talk to Camille, she is busy editing on the soundtrack which is nearly done. From the loudspeakers comes sound of wind whistling, many layers of a talking voice and a deep, warm, slightly disturbing tone.

We learn that the film is about Uzbekistan and an extinct tiger.

Hi Camille. What is this soundtrack made up from?

It consists of recordings from my home studio of the glass armonica, feedback and several more abstract sounds. The bass elements are treated to make a certain sense of space and presence; repeating throughout the film to link certain images together and reinforce the telling of the story. The bass also balances the high range sounds of the armonica. There is also diegetic sound, and a voice-over, a “letter” to the tiger, which is often conceptually referring to something that happens in a dream or in the past. Visual and the sound in realtime and giving the same information, occurs only in one small section of the film. Elsewhere the sonic narrative is a matter of negotiating when to give more information or to take it away: Just because you have a outdoor scene, doesn’t mean the sounds of birds should actually be there.

What is the theme of the film?

The film is about the now extinct Tiger of Turkestan, one of the biggest cats to have ever lived, who still has a very strong presence in the culture of Uzbekistan today. People still dream about it – a cemetary caretaker in the film tells about how the tiger comes there every Friday as soon as it turns dark. The Uzbekistani history is one of great change. As one of the poorest Soviet republics, the area got made into new regions, the original language changed and with an ongoing loss of many aspects of culture. The tiger is tied up to the nation’s history. It’s extinction was a result of, amongst other things; forced industrialisation, watercorses transformed into desert landscapes, fur and boar hunting by Soviet military personnell.

So, who is the filmmaker and how did you meet?

The filmmaker Saodat Ismailova asked me because apparently the tiger was capable of hypnotizing its prey – Who knew tigers could do that? It’s a frequency that they could emit or vocalise which hypnotized their prey before they attacked it. The magic, mystery and dream that is associated with the tiger is similar to the superstition connected to the glass armonica, including the hypnotizing quality that can be at play when you use the instrument in certain ways. I couldn’t find any information about this, but I also like that – it reiterates the space between actuality and myth.

You have many times earlier been working with sound and its impact on your body and your emotion, isn’t that true?

I am interested in that, but I always clarify that I use the armonica quite objectively as a contemporary instrument – sonically in relationship to the electric guitar feedback and the very objective and  ”neutral” sine wave. I have no claims on what the music will do and I don’t expect it to do anything. I use it as sound. But I am interested in the mystery, historical connotations and censorship in relation to it and the fact that some people loved it and some were afraid of it.

What are your thoughts on similarities and differences between a sine and the armonica?

The sine wave can be described as a “perfect” tone with no overtones, whereas the glass armonica is near perfect, with characterizing overtones. Because the bowls are hand blown, if you see it spinning on its spindle it looks a little wobbly. That creates beats within the loop that you wouldn’t have in a sine wave cause there would be no sense of an beginning or and end, its the same exact tone wherever you enter it. The sine has no overtones, the armonica has some, very few but they are present. The wave is not completely pure, and for me that is also what gives the sound its interesting qualities. For me, this is important as a social metaphor. The overtones give unique character which is far more valuable than the ‘pure’ tone. If you relate overtones to genetic diversity, we already know that groups with poorly diversified gene pools cannot thrive well.

What is Cato’s work?

My focus is the composition. The balancing and mastering of the sound is in Catos hands, also there was certain creative elements that I wanted to execute that he has great expertise in developing. We have worked together many times before. I came to Notam first time around 2004 I think, a long time ago. Cato knows my working language and my intentions. It is important for me to feel comfortable with where my role ends, his begins, and the overlap. Also to have the possibility to jump in to each other’s seat to make changes or suggestions makes it a good working relationship.

From the program of CPH:DOX:
Saodats Ismailova’s symbolic and suggestive film is a cinematic letter to an extinct race of tigers, and uses an almost hallucinatory force to conjure up a mythological, Central Asian world of yesterday. A majestic animal that speaks to us about the historical changes that led up to its own extinction as a result of modern industrialisation and fur hunting, but which lives on in the collective imagination of Turkestan as a sacred image of the soul. Ismailova’s elegiac but vitalistic work lets us sense historical and cultural changes through a hypnotic smokescreen of visions. The patinated archive footage of urban life in the region at the beginning of the 20th century, which emerges before us between pictures of today’s vast landscapes, is haunting in its modest intensity. ‘The Haunted’ is a work that consists of admonishing appearances, but is also an aural experience of a different (and more spiritual) world.