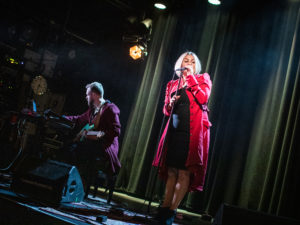 This Wednesday Notam will be hosting an afternoon performance of «LITTLE WOLF» by Kate Pendry.

The Ballad of Little Wolf explores themes such as love, parenthood, sex and death based on Ibsen’s Little Eyolf. Pendry’s experiments with biometric technology and the range of auditory bodily sounds and voice use, combined with Steffensen’s focus on the guitar’s role and expressive possibilities as a tool in conveying meaning-bearing sound are fused together to create a mythical expression. A performance where Pendry and Steffensen present a special palette of expression as musicians and actors.