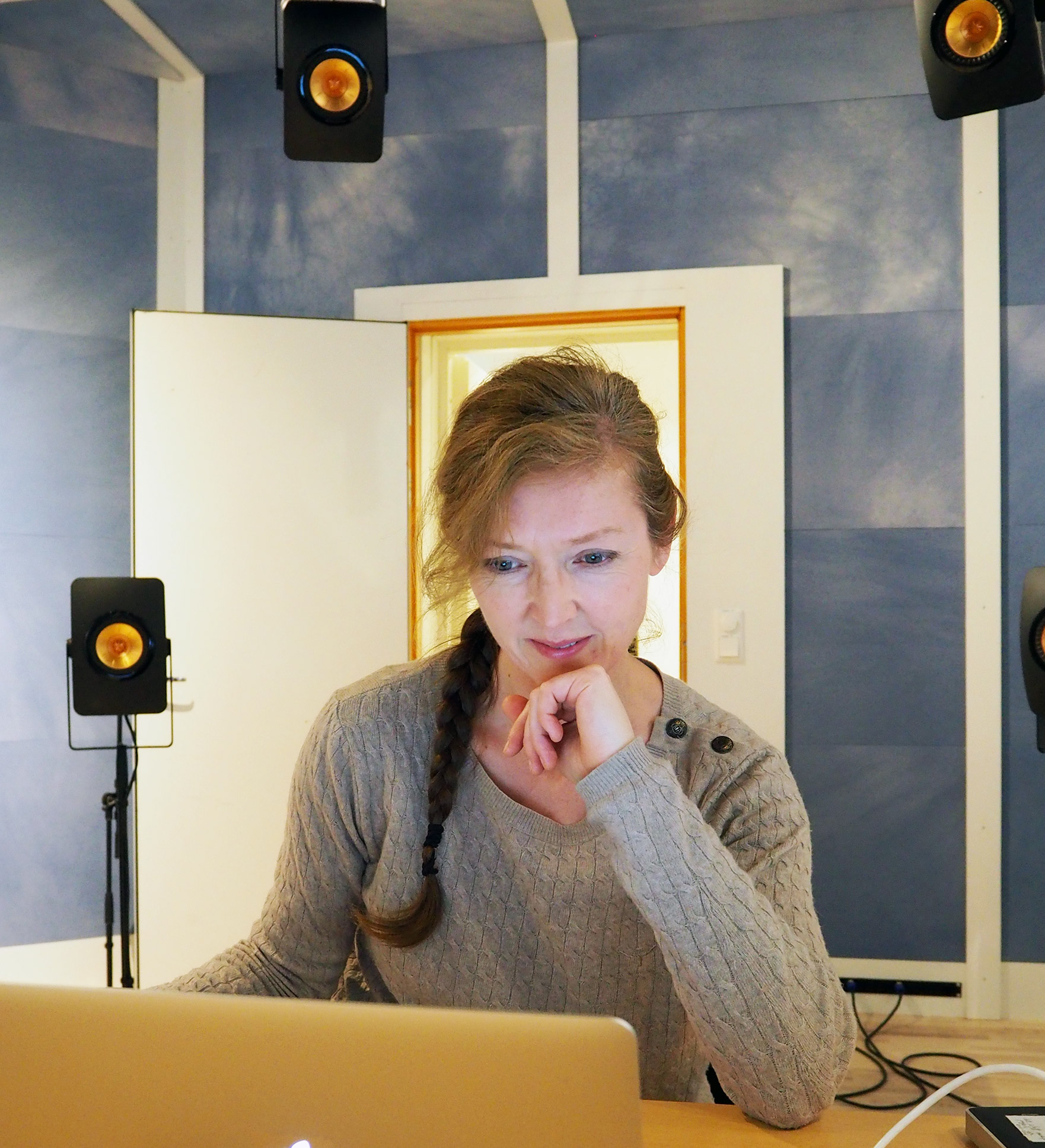 We are in the studio Sirius where Natasha Barrett is working on a composition – an acousmatic work spatialised in higher-order ambisonics. Her spatial audio format is 6th order 3D ambisonics: a 47-channel encoded format capturing high resolution spatial information in all directions. To play the work in its highest resolution requires approximately 50 loudspeakers arranged above and around the audience. The concert on the 11th of Sept is taking place in the Marmorsalen at Sentralen, where the ceiling of the Marmorsalen is too high to set up elevated speakers in the time available, so instead the concert will be played through a 24-loudspeaker horizontal array, that promises to be equally exciting.

Higher-order ambisonics makes it possible to control the spatial composition in a very precise way and to play the piece in virtually all contexts. Natasha explains:

“I can be invited to play my higher-order ambisonics works over very large speaker arrays such as the 75-speaker ambisonics system at IRCMA, or over just 8 loudspeakers at a contemporary music festival. The format allows me to render a version suitable for any speaker layout. Although with fewer loudspeakers you lose spatial resolution, I have invented some tricks and techniques over the last 18 years of working with ambisonics that make this easier; some techniques are published, while other are still private.”

Yours is an acousmatic piece. How would you explain this term?
The term ‘acousmatique’ was used first in the 50’s to define the listening experience of musique concrète and was later developed by Pierre Schaeffer to refer to a sound that one hears without seeing the causes behind it. Essentially, by removing visual elements we develop new strategies for both listening and composing. Schaeffer was interested in treating his sound in way that would exclude referential aspects of the source, so that he could focus on other aspects of the sound, such as timbre and morphology. Later, both Schaeffer and the composers that came after, additionally recognised that listeners will naturally find real-world connections to the sound they hear, even if these connections may be vague or fairly abstract. But nevertheless the acousmatic approach is maintained – by removing visual sound causation, the eyes no longer tell you how to hear. The sound is free to evoke space, place, ‘pure music’, or in fact anything else the composer wishes to explore. In the piece I’m composing at the moment, I’m trying to place listeners inside an unfolding sound experience that feels as if it pulls them physically in different directions.

Does it have to do with evoking some kind of free thought?
Yes, or the freedom of association. Listeners are unlikely to wildly connect random images, sensations or musical experiences to the sound they hear. One of the composer’s jobs is to guide them through the music and help this process. In this respect the sounds in my new piece vary from concrete to abstract. In particular I’m interested in how our ideas about causation and sound identity are formed. For example, the way sound moves in space might imply something specific, even though the actual sound material may be fairly abstract.

How do you use and incorporate immersive sound in your artistic work?
The answer to that depends on which piece I am working on.

It looks like NMH is focusing more on EA music by employing you in a 50% professorship in EA-composition? Are you teaching ambisonics?
I’m teaching ambisonics to the Masters students, while the Bachelor students first need to get to grips with the basics of electroacoustic composition. The students that I’ve had the pleasure of teaching so far are rather wonderful – although knowing little about electroacoustic composition from before, they are enthusiastic, open-eared, and colourful with questions that make me think on my feet! I would very much like to be able to spend more time teaching acousmatic composition and ambisonics, but I have to look at the complete picture, and that must also include live electroacoustic music with instrumental performers. What’s important though is that they acquire skills and feel inspired. In particular, we need to produce more high profile electroacoustic concerts so students can hear, and be inspired by, the way in which the music leaves the studio and enters the public arena. This has been my concern for many years now, but it’s a difficult problem to solve unless the festivals and new music organisations in Norway also take on the challenge. Over the past years electronic improvisation has been at focus, I think at the expense of compositional forms.

How can Notam play a role for the students at NMH?
The studio Sirius, is a good resource. Although there are studios at NMH, they don’t provide the full 3-D spatial audio loudspeaker array. I hope that my students will enjoy the experience of working here.

How do you balance between your technical and your artistic work?
I think I have a broad understanding of technical matters, and I am also interested to learn and develop new technologies. I don’t think it’s possible to stop learning. When it comes to my creative side, I no longer feel that technology is restricting me. I can find, grab, pull together the different tools I need to express specific ideas, or other times experiment with a new technique and find out what happens. I have always balanced my research and my creative output. During my doctoral degree and since then, research into technologies, aesthetics and music has for me always been coupled with a creative output. Often, one has supported the other. These parallel streets often seem to converge.

You have a quite big international network and just arrived from Stanford?
Yes, I travel quite a lot to give masterclasses, play concerts and work for periods as a guest composer. I recently came back from two fabulous weeks at CCRMA, Stanford, working in a room similar to this but with a suspended floor, where you also hear sound from below. The results create a spatial scene that is so transparent, and I found it allowed even clearer focus when composing. The team also set up a full 3D concert sized system to play higher-order ambisonics works. Besides playing a concert, it was also possible to listen and compose in the space. Amongst other things, while there I worked on the piece I am working on here and also finished a work for violin and higher-order ambisonics. The violin work will premier in Oslo on October 5th, after which we take it to Huddersfield, Gøteborg and finally Florence.

Natasha has been working for the last few years with putting together a loudspeaker facility for 3D sound. With Anders Vinjar, Anders Tveit and others in the electroacoustic music community, the project has now crystalized as 3DA – foreningen for 3D-lyd. With support from Rom for Kunst, 3DA purchased a 24-loudspeaker facility for use in high quality spatial audio concert productions.

Who can use the loudspeakers?
Composers and audio artists that are working with high resolution contemporary 3-D sound and music. We will soon be opening up for membership to the organisation, and then after you are a member, you write a short application describing the event and need. There is a small fee that contributes to cover basic annual costs. The system can only be used indoors, and it is the users’ responsibility to ensure adequate technical support as 3DA is not a PA company. So, what 3DA currently provides is an array of high quality equipment of a type that is perfect for high resolution 3-D sound, and not possible to hire from a normal PA company. 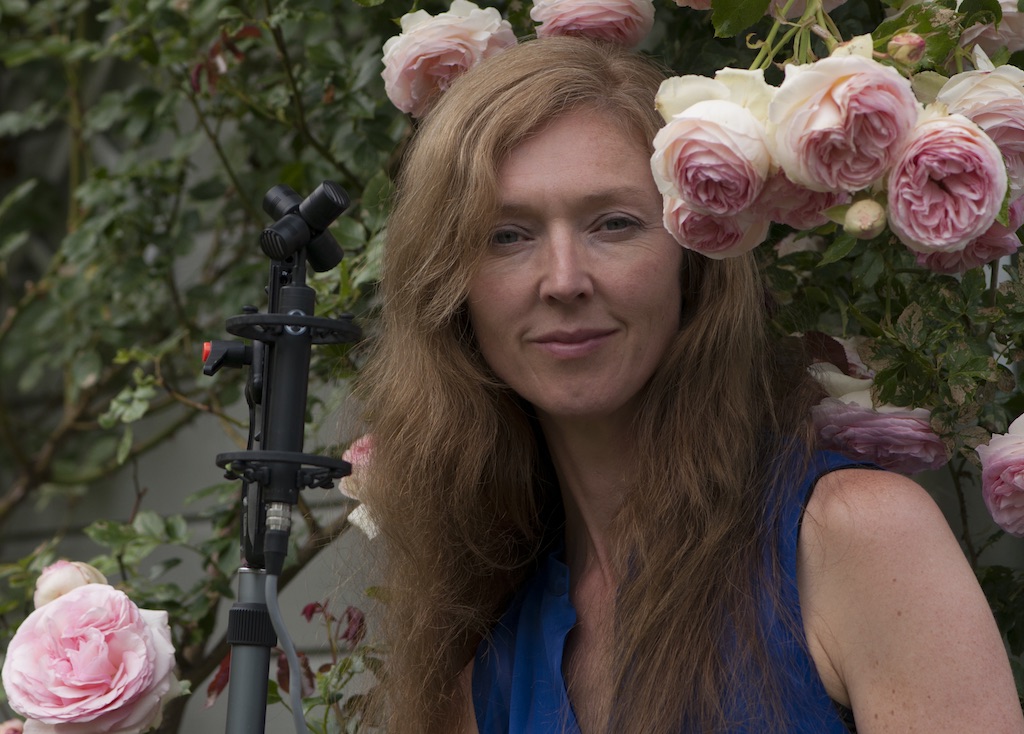 From the Ultima program:
Natasha Barrett has made ambitious pieces, installations and sound art for concerts and festivals all over the world. Her work is widely acknowledged internationally, as a recent Honorary Mention from Ars Electronica 2017 and several prizes including the Nordic Council Music Prize demonstrates. Her acousmatic electroacoustic composition Involuntary Expression explores the idea of music emerging from microscopic movements of hundreds of people. The body’s tiniest movements are recorded using a high-speed, high-res 3D tracking system; they are then blown up and converted into audible spatial sound structures. With its dramatic 3D surround sound, listeners will feel the music instead of seeing it. The piece is commissioned by Notam, composed in high-end 3D ambisonic format, and diffused via 24 loudspeakers