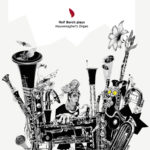 Clarinetist Rolf Borch meant “Houvenaghel’s Organ” was his debut as an organist. The record contains three classical organ works and a new work by Borch himself, all recorded exclusively with clarinets. The album was recorded and produced at Notam in collaboration with Cato Langnes. The polyphonic organ works are recorded track-by-track, with the different organ voices recorded on clarinets adapted the notated registry and the desired sound quality. Also certain phrases were recorded in several different clarinets, and later edited together to cover the organ’s registry.