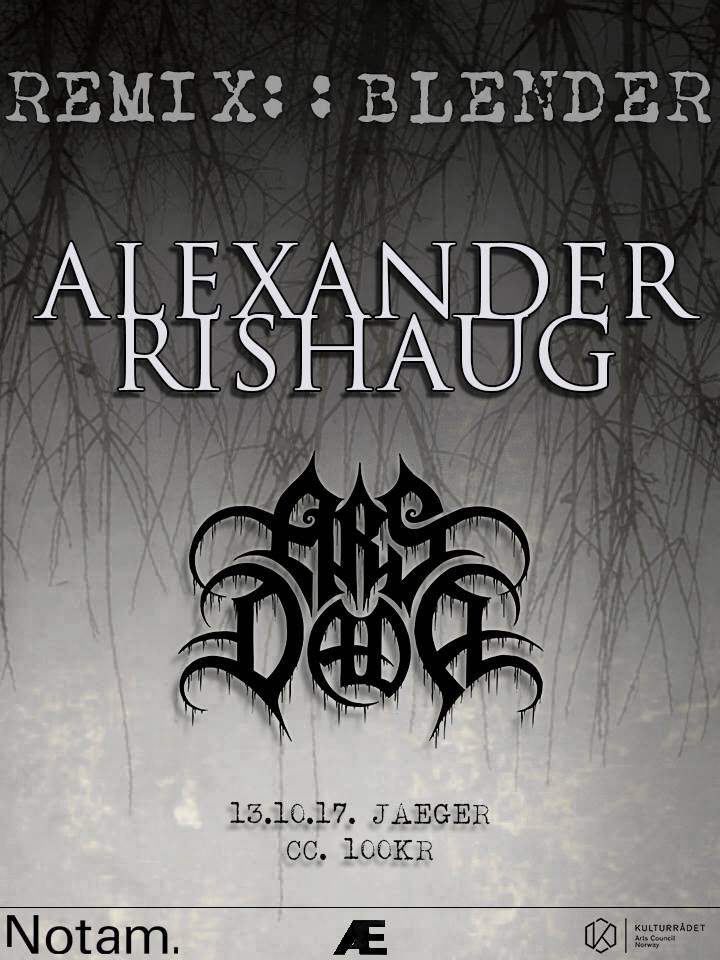 At Jæger, on Friday the 13th of october 9PM, Notam is happy to invite you to concert no. 3 in the series Remix::Blender. The series presents composers and practitioners who merge experimental club music and electronic contemporary music by remixing each other’s works.

This time we bring you the breakcore/drum’n’bass artist Ars Dada and ambient/sound art composer Alexander Rishaug.

Ars Dada is an alias of the Molde-based electronic artist Erlend Bilsbak.
Erlend has been touring throughout Europe, parts of the United States and Russia and has played at festivals such as the Elevate Festival, Incubate Festival, Norberg Festival, Bangface Weekends and has shared scene with artists like Venetian Snares, Bong-Ra, Next Life, Igorrr and many others in the scene. Ars Dada’s release can be found on the labels Sonic Terror Recordings, Peace Off and Cock Rock Disco.
Ars Dada’s music is characterized by love for dystopian samples, metal, horror films, industrial snares and rumbling bass lines.

Alexander Rishaug is a sound artist, producer and musician. His sound is melodic, melancholic and often quiet. Rishaug explores tones and textures through the use of electronics, field recordings, toys or simply just playing around with an instrument. Rishaug combines the intimate knowledge of his musical equipment with the curiousness of an amateur.

The result is always a detailed, rich and subtle sound, with a sharp focus on structure, rhythm and stretched out melodies. His sonic landscapes build and expand slowly, thereby moving the listener along an exploration of the experience of time. Acoustic and digital sounds are blended so that the origin is sometimes difficult to trace.

Among the musical references we find minimalist old-timers such as Steve Reich and Terry Riley, whose repetitive patterns and drones respectively, form the basis of much of Rishaug’s album Possible Landscape. These song structures are combined with a sonic palette that is equally informed by post-90s electronic music and glitch as by composers such as Pierre Henry and Bernhard Parmigiani.

In particular there are many traces of the same kind of emotional use of electro-acoustic sounds that is found in Parmigiani’s music. Although the glitch-sound will continue to be associated with Oval and the Mille Plateaux-label there is little in Rishaug’s music that resembles this kind of coldly theoretical and clinically depersonalized sound. Rather, there is in Rishaug’s music always a deeply human warmth that more resembles the personal investment of a singer-songwriter than a laptop-musician. The patient listener will pick up on these qualities and as a result the experience of Rishaug’s music is rich with potential listening pleasure.

Rishaug was a part of the improv collective ARM together with Arne Borgan and Are Mokkelbost. Live they collaborated with artists such as: Håkon Kornstad, Martin Horntvedt, Ingar Zach, Pål Asle Petersen, John Hegre, Jørgen Træen, Toshimaru Nakamura and Salvatore.

The production is sponsored by Arts Council Norway.