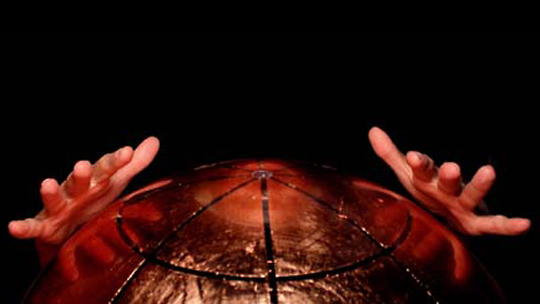 an arranged marriage between theater and technology

Can technology influence and explore stage text?
Or does the technology fall into place when the text is finished, and is it the case that text needs developed technology to reach further?

Kate Pendry and Ståle Stenslie invites us to their new concept Voice Catcher. In a meeting with Stenslie’s newly constructed machine, Pendry will test interactively what is happening to her as a dramaturgist and actress: Will she be able to cooperate with the technology in a way that makes us forget it’s there and discover/remember the magical and special aspects of what has inspired her storytelling?

The central object in the performance is a bronze-colored sphere which is the instrument that Pendry plays on. She conjures and manipulates sounds in surround by running her hands around the sphere’s surface. The sensors i this sphere is implemented at Notam and programmed by Thom Johansen.

Kate Pendry is an actress who addresses political and taboo-ridden societal phenomena and holds them up for discussion without prejudice, being of the opinion that art should not contribute to general contentment. Pendry questions whether people could be victims of societal structures. She has worked with technology in a variety of ways in her performances for 20 years, and has worked with Stenslie for an equal amount of time.

Ståle Stenslie is a professor and a curator who develops sensory technologies and experimental tools for novel forms of artistic expression.

The development of Voice Catcher is supported by Dramatikkens hus, Arts Council Norway and Notam.