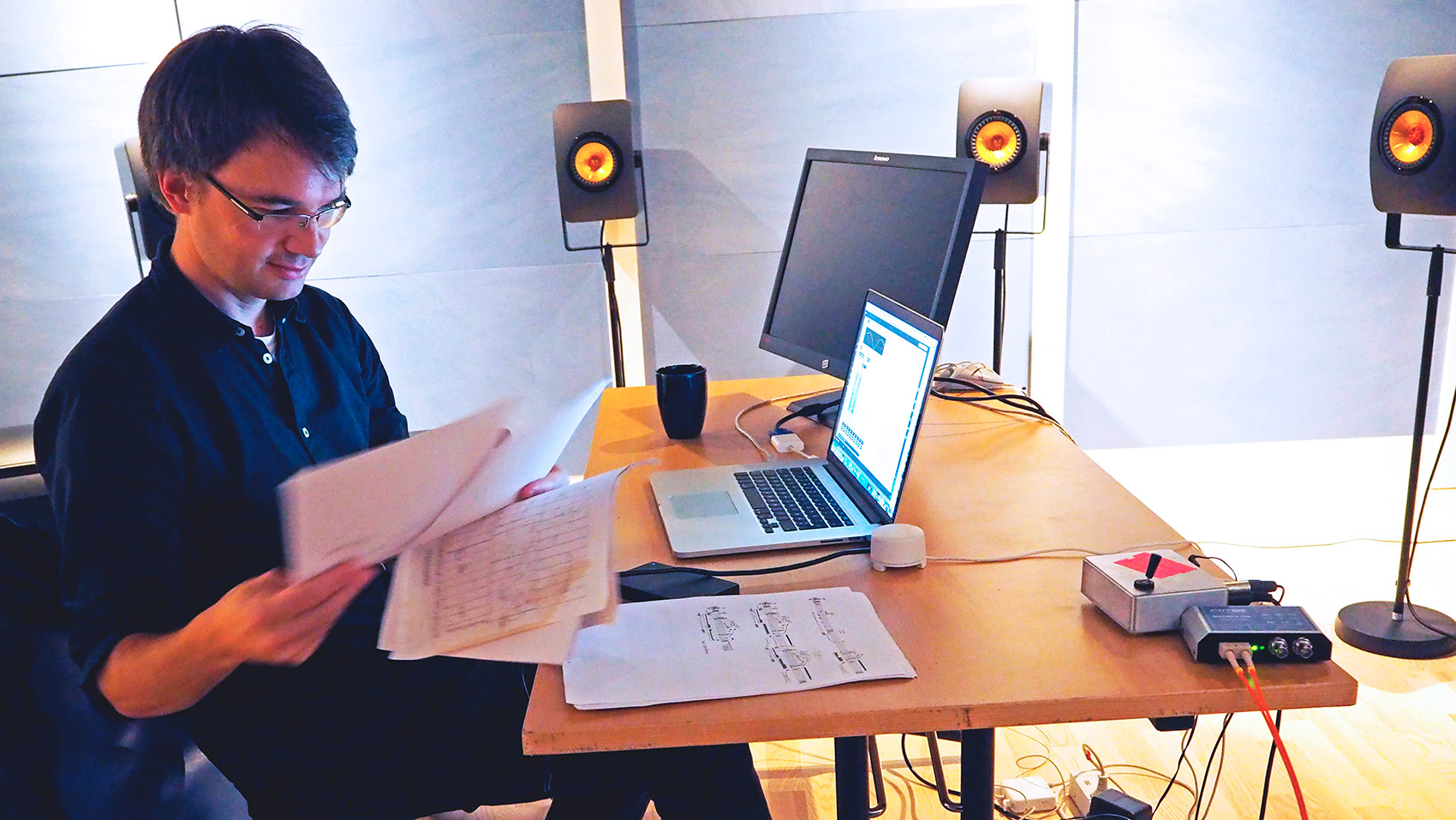 In the autumn of 2016, it has been 10 years since the opening of Lydgalleriet in Bergen. This is marked with an anniversary exhibition for which a group of artists is invited to create new works.

For this occation Førisdal has realized some of the graphic scores for electronic music which the composer Bjørn Fongaard himself did not get the opportunity to do, and this is the first time anyone can listen to them. These works premieres in an installation of immersive sound at Lydgalleriet, over 40 years after they were written. Førisdal has used Max to program each individual tones from the graphic scores, and Magnus Bugge has programmed the patch that plays each sound. Three of Fongaard’s pieces for guitar from the album ‘Galaxe’ (2015) has also been remixed for 12 channels by Cato Langnes at Notam.

Anders Førisdal (1977) is a guitarist and the artistic director of the ensemble asamisimasa. He recently submitted a PhD thesis on the avant-garde composer and guitarist Bjørn Fongaard.

Bjørn Fongaard’s production is distinctive in an international context. Anders Førisdal has researched through praxis Fongaard’s playing techniques and cryptic notation for several years, and in 2015 he released the double album ‘Galaxe’ produced in collaboration with Cato Langnes at Notam, and the album received critical acclaim. It gives the first interpretation of Fongaard’s unusual scores beyond the composer’s own.

Fongaard himself recorded the piece with the same name as the disc: ‘Galaxe’ at NRK in the years of 1966-67. This recording consists of 4 channel tape and live guitar, is in mono mix and has been released several times as part of anthologies.

Bjørn Fongaard is one of the most prolific Norwegian composers of all time. He is probably best known for his custom microintervallic guitar which for he composed a series of works; both for solo guitar and accompanied by recitation and percussion. He used quarter-tone scales, preparations and esoteric playing techniques on the electric guitar. Example of objects used for playing and preparation of the guitar is: small violin bow, straws, sponges, plastic plates, metal rods and felt plectrum. Fongaard was undoubtedly ahead of his time, and in recent years the music has gotten more attention. The generally open texture and free form, written down in a free rhythm where a centimeter represents a certain duration, creates the feeling of a new musical language. The timbral sensibility is reminiscent of what is found in works of composers like Debussy, Feldman or Scelsi, according to Førisdal. Fongaard used modern science and natural processes as important models in his work.

Førisdal first met Fongaard’s music through playing piano in high school. In 2005/2006 he began to search through the catalogue of his works. He found many guitar pieces, many pieces just for electronics, guitar recorded on tape, some works of which there are recordings and others which have not been recorded, and a desire to help make Fongaard music more known.

Anders Førisdal is exhibiting at Lydgalleriet with Charlotte Piene and Christian Blom.