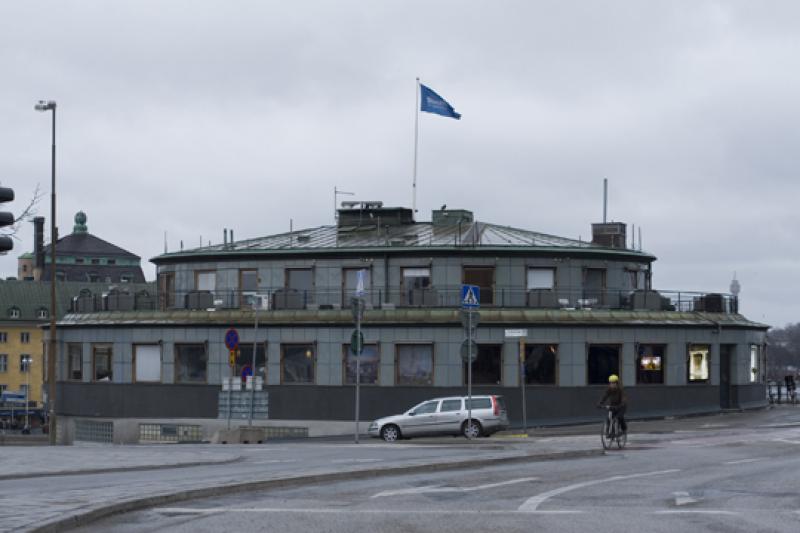 In the middle of Slussen is the round house, which was part of a future architecture and vision when Slussen was built in the 60’s. It is now a declining house, but still in use. This house and place, installation artist Ewa Jacobsson worked and transformed into a BREATHING HOUSE for 8 hours.

Around the house there is water with color traffic, subway stations, car and bus traffic, a high activity square, tall and low buildings, cyclists and pedestrians in thousands. In other words, acoustics are varied and in motion all the time.

“Breathing House II” has a side theme, Young Girls, since October 11th was the day to mark the United Nations International Day of Girl Children for the first time. Jacobsson would use the lower floor where people can come right next to the windows, with objects, drawings and five smaller sound compositions from local speakers. Field recordings, SLUSSEN, a busy city environment with high noise and activity levels in Stockholm, was the audio material she would use, in addition to vocals and text fragments.

All sound was hard processed in groups (subway, cars, buses, birds, people’s talk and children’s cries; traffic signals, car horns, church bells.) In order to carry through the very constant noise of certain frequency teams at Slussen. All the details of the sound are processed and worked on further. The entire material was finally collected and formed in a 37-minute audio composition, where the sound goes in and out and the details are thrown out. The entire audio composition is played during the entire installation period.

26 speakers were set up on the roof terrace, and five stereopairs down the windows. The big sound went out into stereo signal, in two and two speakers, and since the sound and acoustics around this house are so varied, this became a changeable sound throughout the sequence.

The installation played eight hours, from 13.30-21.00 and the first and last hours it played at max volume.

The audience and the city were part of the live mix that occurs when an outdoor audio installation is placed in the middle of a place like this: a random composition that changes constantly. Some stopped for a long time, someone cycled or walked amazed or passively by. The windows drew people to the house, and the local little compositions were mixed with the big sound and the city. In the first and last hours the sound could be heard far beyond the Old Town and beyond the water of the Modern Museum.

One thought on “Breathing House II”