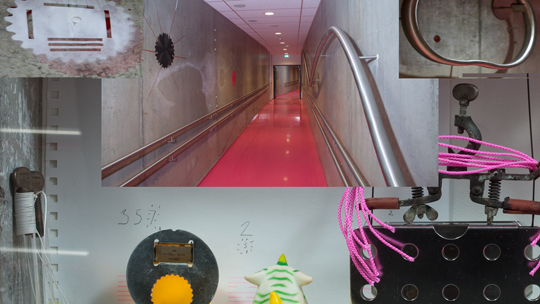 “GANGEN” is a site-specific permanent installation at Bjørnsletta’s new school in Oslo. Ewa Jacobsson worked with the sound master first in Notam’s studio and later on the spot parallel to the visual so that she listened to, changed and finalized the sound composition relative to the actual room. This is a living place-specific process she wanted to work in.

An outdoor microphone picks up real-time sound and sends it to “GANGEN”, and finally added is the direct sound of people’s talk and noise as they move through.

The composition is made for “GANGEN”’s own acoustics and how the sound moves there from seven sources of sound and relative to who will go through it. It will be a live mix that will always be changing.

Two steel tube objects with speakers inside: “Ropert”, an 18 m long curved tube with two speakers that cast the sound out to the side. “Enclosed sound”, a closed ellipse form with a speaker (the sound does not always come out, you have to put your ear up to).

Speakers of two niches taken into the concrete wall, in two levels, one for the big children, one for the smaller ones. Real-time sound from the outside of two speakers in the sky up over the playground, ball games, birds etc.

The audio composition spreads out in varied pulses and pannings.

The audio composition is usually not loud and noisy, but it is constantly moving between the different sources of sound and changes a lot in dynamics and transparency.

Ewa Jacobsson has worked in place, directly on the wall, has followed the raw concrete in the form of light, transparent drawings, and graphic, mathematical markings of injuries of the concrete, texts and lines connecting the floor and ceiling.

The two niches consist of objects from the old, now tore-down school, along with drawings and textual rebuses.

The texts and the visual associate the audio material. The old school logo – two bears – is part of the installation. The floor is a mark of “GANGEN”’s propagation, in a color that binds it all together.

The transport of sound and the visual is in a way both visible and invisible.

Everything should not be readable, decoded and audible right away. Much may be seen or heard first after a long time, or never.

One thought on “GANGEN by Ewa Jacobsson”