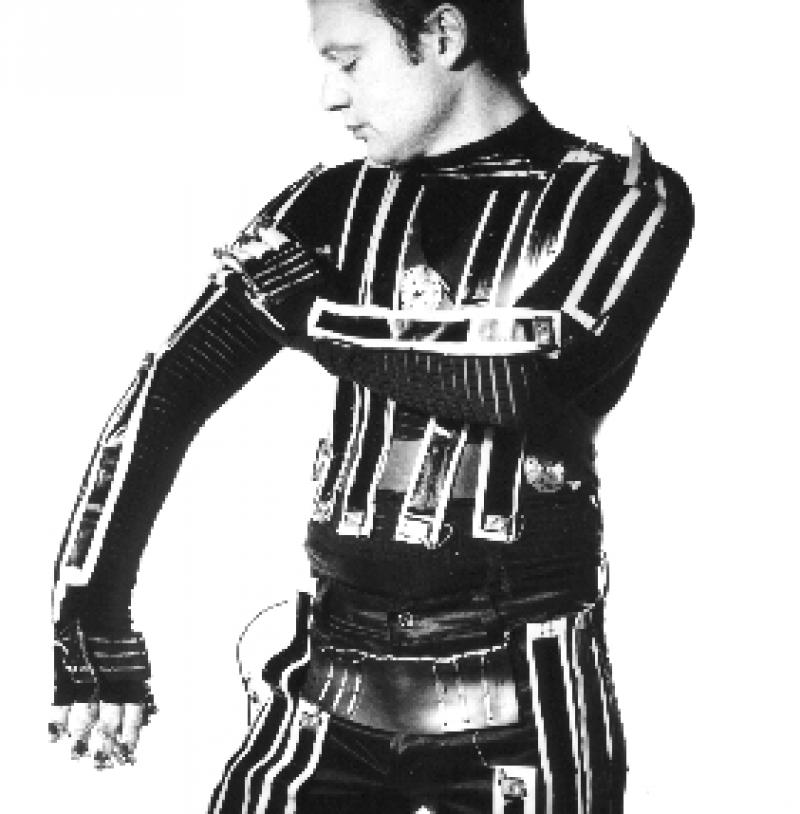 On Rolf Wallin’s initiative, and in collaboration with him, NOTAM made a MIDI controller suit for real time live performace of electronic music in 1994. The suit has 8 stripes made of semiconducting plastic (cut out from anti-static plastic bags) attached to the sleeves and chest area. In addition it has 16 contact points on the hands, the collar and by the pockets. Contacts on the finger tips conducts voltage to these sensors. The platic stripes send analog signals dependent on which area that is being touched, while the contact points function as on/off switches.

The control suit is developed by Rolf Wallin and Øyvind Hammer.

Originally, NOTAM’s MIDIbox was mounted in the belt, converting the sensor values to MIDI signals. The controller suit has been upgraded in 2008, and the transmission is now wireless. The MIDIbox has been replaced by IRCAM’s WiSe Box, and the information is now transmitted with Open Sound Control (OSC). Ultimately, the improved version of the controller suit implements a more general transmission technology that is transmitted using Wi-Fi via a normal wireless router. In additon to the technical improvements, the sound content is also updated with new samples.

The work on upgrading the controller suit has been divided between Anders Vinjar and Henrik Sundt, in collaboration with Wallin. Vinjar has provided for the implementation of the wireless transmission system from the WiSe Box, where the programming of OSC layers into Wallin’s Max/MSP patch has been an important part of the work. For this new system, Sundt has built a special interface on the controller suit. In August and September 2008, Rolf Wallin worked at NOTAM in collaboration with Henrik Sundt, putting the final touches to the upgraded version of the suit. The new version of the controller suit was used for the first time at the Trondheim Chamber Music Festival, where he was the composer in residence.

In 1994, Wallin wrote the piece “Yo” especially for performing with the controller suit.