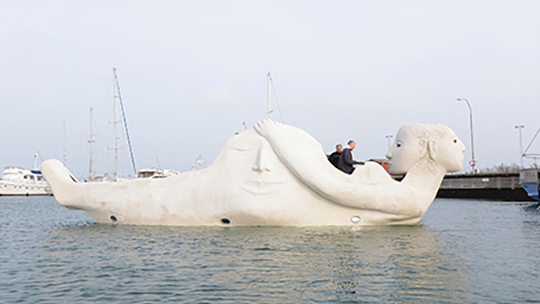 Notam Cato Langnes was recently in Aalborg. He mounted recorders and tuned the sound according to the inside acoustics of the artist Marit Benthe Norheim’s three ‘Life-boats’, three sculptural boats signed the artist Marit Benthe Norheim. They represent three different life stages, is 12 meters long and hand cast in concrete. The sculptures were launched on June 18 and will sail through Europe this fall and in 2017. Inside the boat there are embedded speakers, and the sound of these is planned by Cato with attention to the resonance and frequency responses. The boats gives three different musical styles. The music created by composer Geir Johnson, who also in previous artistic projects have collaborated with Norheim. Cato stood for the technical planning and the securing of the system, amplifiers and reproduction of the sound in the form of CF-sound (sound on compact flash disks), and in collaboration with the composer mixed and mastered all audio material to the respective sound installations at Notam.

The boats are die cast by hand in concrete and propelled by environmental friendly, electric engines. The launching on the 18th was in connection with the Aalborg regatta and in co-operation with Århus, European Capital of Culture

2017. The Life-boats arrives in Århus on the 12th of October and continues their voyage through all the big cities and towns built around the big European rivers and canals. The project binds the cities together in an exchange of culture, a big part of history. The artist Marit Benthe Norheim completes hereby her 8 year long project. As long as humans sailed the seas,  they must have had the urge for protective symbols. The figurehead, to shield against unknown dangers, has always been both a reminder and admittance of the irrational, an aspect of the spiritual as something needed. In this case the figurehead has become the boat itself and not just keeping a lookout from the bow. Each of the sculptures has its own identity and tells a story which the form relats to, and is a threefold portrait of different, human states. «Life-boats» is a piece of art one is able to experience by chance when they pass by. At the same time, they can be entered to experience the inner installations, both artistic and technical, when they find harbor. The audience can sail the ship, at the same time experience the sculpture and the sound installation.

The music for ‘Life-boats’

Over the past twenty years, Geir Johnson composed a number of works to Marit Benthe Norheim’s sculptures. ‘Life-boats’ creates an open, acoustic room for the music to mingle with the sounds of nature, sea and the environment, and the publics experience will therefore change each place the boats arrive. Each of the three boats has its own expression.In ‘Længsler’ the listener will encounter music derived from many different corners of the world, traditional music with the sea as a common theme. The sea has occupied men and women in the making of art, and here we find a small s

egment of the story, from a Laestadian hymn in Finnish to gospel, traditional Thai and several other nationalities’ music which thematizes the sea. In ‘Life’, he has tried to recreate the music that humans might register while we are still in the womb, like noises from outside, an unknown world which may seem alluring, while another portion may seem more challenging  such as life developes for most of us. In ‘Minder’, Johnson used recordings of the voices of 19 women, all of which are also reproduced as figureheads in the boat, where they tell of what has shaped them in life. The women come from different cultures in the world and are figureheads, protectors against narrow-mindedness, repression and intolerance, ambassadors for transnational, cultural values.