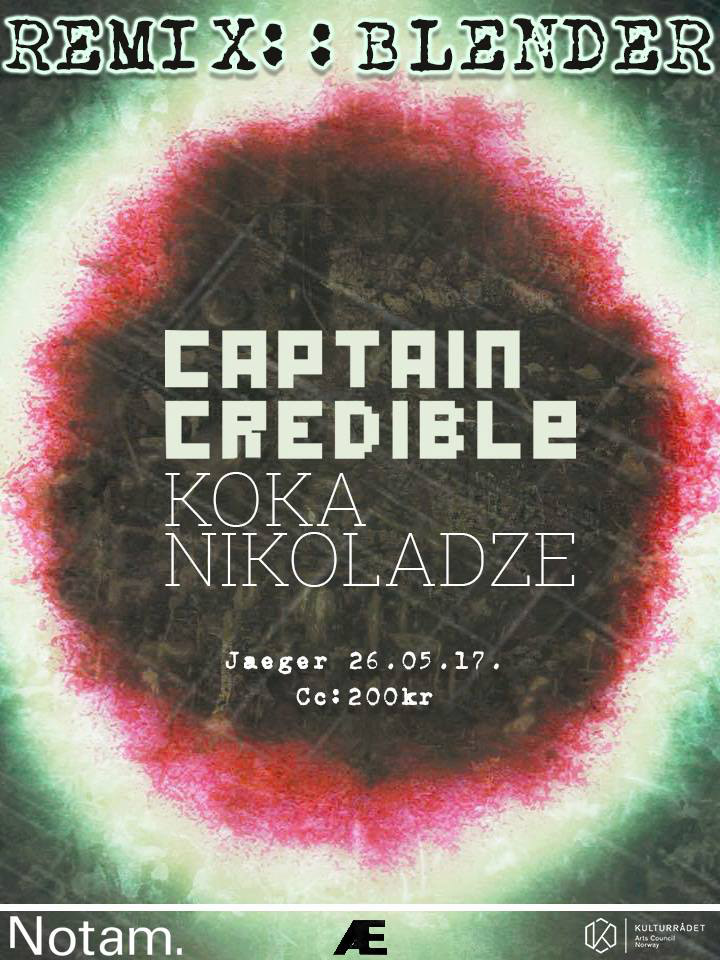 Remix :: Blender II with Captain Credible and Koka Nikoladze. Common: a fondness for making their own instruments, but widely different.

In this series, Notam invites composers and practitioners with different angles to electronic music to merge their worlds, experimental club music and electronic contemporary music, by remixing each other.

Captain Credible is known for his violently eccentric live performances and arsenal of homemade instruments. Hectic beats fight for attention while aggressive melodies and harmonies spurt like battery acid out of the speakers. Somewhere in the land of IDM, breakcore and chiptune Captain Credible carves his way through your mind like a rusty laser. Rip yr nips off.

This is the crazy-scientist project of Daniel Eugene Lacey-McDermott. A curious artist who emerged from Trondheim in 2008 and has been terrorizing audiences all over Europe ever since. Resurrected as a meta musical presence in a not-so-easily defined genre, he claims Aphex Twin, Sex Pistols and Aaron Carter have helped him form his own image. The Captain refers to his sounds as “filthy drunk beats bathing in a lake of melting synthesizers and old Nintendo cartridges”.

KOKA NIKOLADZE is a Georgian artist based in Norway.

Educated as a violinist and composer, with good skills of programming and developing technology, he believes that the will of creating is one of the most dominant human instincts, composes music and invents things all the time.

He lives and works in Norway. Now he conducts a PhD research project at the Norwegian Academy of Music with the main question: how to hack performers.

He collaborates with a number of artists internationally and also holds lectures in composition and computer music worldwide.