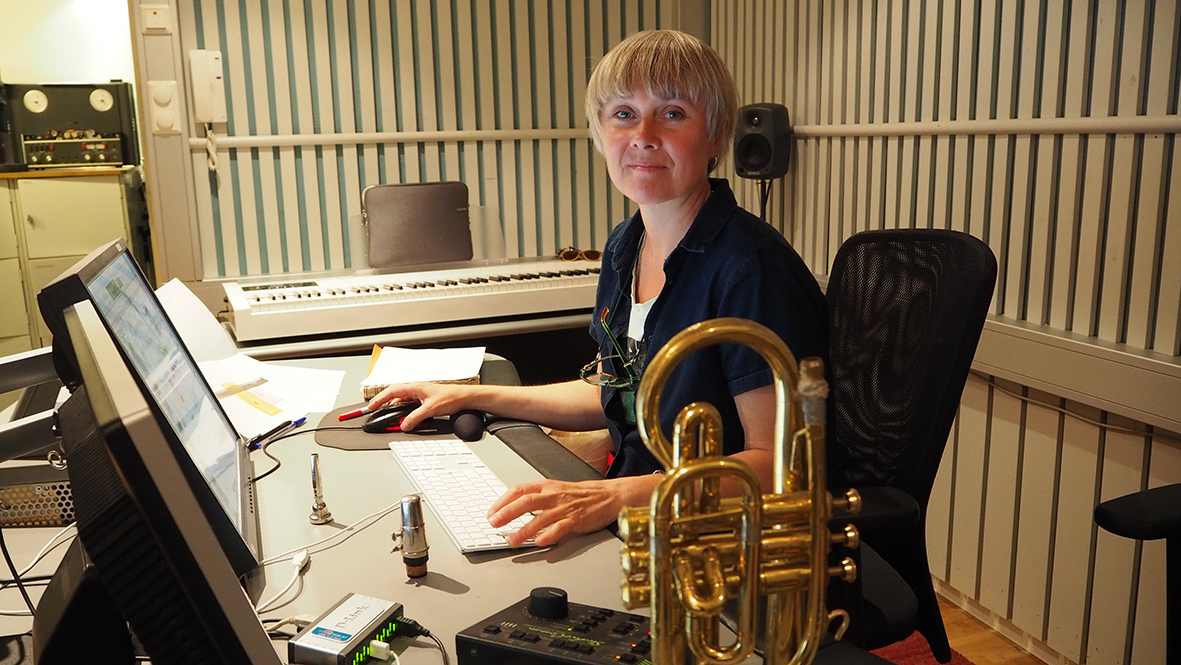 Siri Austeen is researching the process of sound and listening. She uses various materials to send and play back sound, making and using speakers with different membrane materials and the anatomy of sound  through active usage of room’s condition. Her work focuses on the occurance of sound in different materials, and also that we do not listen only with ears.

The last few weeks Siri has been in our studio Wiggen working on two brand new works presented by SKINN (See Art in Northern Norway) in Bodø Biennale 8.-11. September.

Myrr (2016) is a 5-channel installation in glass. The name refers to the marsh (No: myr/myrr), a interim biotope which is neither land nor sea; characteristic of parts of Andøya in the northern part of Norway. This work has the marsh as an idea and concept both in terms of sound material, some of it based on recordings from Andøya, the color scale of the pieces of glass and the composition generally – related to the horizontal and vertical lines in the landscape.

The light that gets lost reveals the beauty of the world (2016) is about the stray signal reflections, mirroring and the transition between source and medium. The piece is a sonic representation and a poetic interpretation of the painting Blue Mirroring by Gunnar Tollefsen. The work consists of sound in 8 channels; a dialogue between two rooms – an open and one closed.

These works will be exhibited in the library Storm and at Bodø Art Society. Both works are part of the exhibition My Landscape, which is inviting 6 contemporary artists to enter into dialogue with the relatively unknown northern Norwegian late modernist Gunnar Tollefsen (b. 1933 in Vesterålen) In addition to Siri, the artists presented during the exhibition are: Hans Christian Gilje (b. 1969), Johanne Hestvold (b. 1988), Linn Halvorsrød (b. 1980), Olav Christopher Jenssen (b. 1954), Edvin Larssen (b. 1977 ), and Vemund Thoe (b. 1980). SKINN wants to point towards a common point in the practice of all the artists who are representing, and provide new perspectives to their various artistic ventures as well as reflect on the contrasts and similarities between shifts in the art of late modernism till now.

Siri Austeen started her artistic career working with sculpture, spatial installations and multiples. Her work with sound started as performance-based experiments that eventually became the band Tremulators. This brought her on to more temporal expression, and she was active with performance and on the concert stage for many years. She worked first at Notam in 1996 with the project Audio Mobiles, a series of multi-channel systems in cars. Here she came in contact with new music, composers, new thoughts and impulses, both conceptually and aurally. Faced with the developer Øyvind Hammer, she got help and insight into new ways of thinking about technology and art. Siri builds for example, separate coils of magnet and copper wire, working with sound transmission through various materials and work in the studio as a performer and technician.

Siri Austeen (b. 1961, Skien) is a graduate of the Art Academy in Trondheim. Austeen is an active exhibitor with a number of public art projects, live performances and sound publications behind her and was one of the initiators of the online soundmap Sounds like Nordland launched in 2015. She is involved in several bands projects and artist network CAN – Concerned Artist Norway. She has presented her work at Trøndelag Centre for Contemporary Art, the Ultima Oslo contemporary festival, House of Artists, Bomuldsfabriken Kunsthall and Henie Onstad Art Centre. Austeen lives and works in Oslo and Halden.